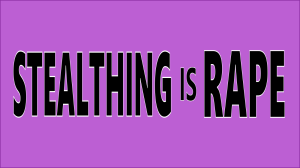 I fully understand that this story isn’t going to get a ton of attention anywhere because of the U.S. House vote on taking health insurance away from millions of Americans earlier today, but, as reported by the Madison-based Wisconsin State Journal’s Molly Beck, a Democratic member of the Wisconsin State Assembly has proposed legislation that would criminalize nonconsentual condom removal during sexual intercourse, which is also known as “stealthing”, in the State of Wisconsin:

Melissa Sargent, the Wisconsin legislator who proposed the anti-stealthing bill in her state, is one of the best advocates for women holding elected office anywhere in the country. Even though Sargent is a very progressive Democrat in a state whose government is controlled by very conservative Republicans, Sargent has had success when it comes to getting legislation designed to protect women enacted. A notable example of Sargent’s work when it comes to protecting women is Sargent’s successful 2015 push to make upskirting a felony in Wisconsin.

I encourage elected officials in all U.S. jurisdictions to criminalize stealthing, because stealthing is rape.

In the New Hampshire House of Representatives, a legislative chamber that has 400 seats and serves as the lower house of the state legislature of a state with slightly over 1.3 million people, you’re bound to find some interesting people serving as state legislators. One such interesting person is New Hampshire State Representative Amanda Bouldin (D-Manchester), who has earned national attention for criticizing a sexist Republican-backed bill that would prohibit women from going topless in public in New Hampshire:

Under current New Hampshire state law, both men and women may expose their nipples as they so please. Some Republicans want to change that. A recently proposed bill, sponsored exclusively by Republican men, would make it illegal for a woman to “purposely expos[e] the areola or nipple of her breast or breasts in a public place.” (The bill makes an exception for breastfeeding.) Men would still be permitted to expose their nipples in public with impunity.

In case you’re wondering what the areola is, it’s a donut-shaped area of skin immediately around each human nipple that is of a different color than most or all of the rest of a person’s skin.

Not surprisingly, Bouldin was not one bit happy about the hypocritical standard of banning women from exposing their breasts in public, while continuing to allow men to do so. So, she posted her opinion on Facebook, and at least two Republican state legislators responded with vile, sexist remarks.

One of the sexist Republican state legislators who confronted Bouldin online is Josh Moore (R-Merrimack), who essentially encouraged sexual assault:

…If it’s a woman’s natural inclination to pull her nipple out in public and you support that, than (sic) you should have no problem with a mans (sic) inclination to stare at it and grab it…

Grabbing a woman’s breasts without her consent is sexual assault, which is a criminal offense in every jurisdiction in the United States and something that nobody should encourage.

The other was Al Baldasaro (R-Londonderry), who essentially called Bouldin’s nipples ugly:

Amanada (sic), No disrespect, but your nipple would be the last one I would want to see…

If you’re calling a woman, or any part of her, ugly, you’re intending disrespect.

If you want to thank Ms. Bouldin for speaking out against the sexist hypocrisy in the New Hampshire Nipple Bill, here’s her Twitter page. Please be respectful to her!

The Montana chapter of Americans for Prosperity goofed when it was responding to the state’s House of Representatives approving legislation to expand Medicaid.

After the House passed the legislation on Thursday night, according to The Great Falls Tribune, Montana AFP state director Zach Lahn released a statement saying that his group was “deeply disappointed in the state legislature’s decision tonight to expand Medicaid. This decision stands directly against the voices of millions of Montanans who have made it clear that they do not want more Obamacare.”

I’ve not seen any polling, but, given that the Republican-controlled Montana state house passed a Medicaid expansion bill, I’m guessing that there’s more people in Montana who support expanding Medicaid than oppose expanding Medicaid.

Scott Manley, an official with the right-wing, pro-wage theft business group Wisconsin Manufacturers & Commerce, claimed in a public hearing held by a Wisconsin State Senate committee that 300 of the WMC’s 3,800 members responded to some sort of inquiry by the group as to whether or not they support right-to-work-for-less legislation, also known as wage theft legislation, and that 81% of them support the legislation.

In case you’re wondering how I came up with that figure, I didn’t pull it out of my rear end. Instead, I made two calculations with Windows Calculator:

To put that another way, one of the largest organizations that is pushing the Republican-controlled Wisconsin State Legislature to allow non-union workers to effectively steal wages and other benefits negotiated by a labor union without paying for those benefits in the form of union dues or fair-share fees with support from only 6.4% of its members. This is not lost on many Wisconsinites, in fact, Lori Compas, the executive director of the Wisconsin Business Alliance (WBA), the main progressive business organization in Wisconsin, called local chambers of commerce in seven Wisconsin State Senate districts that are represented by Republican state senators, the 1st (Frank Lasee), 2nd (Robert Cowles), 10th (Sheila Harsdorf), 11th (Stephen Nass, who ended the public hearing early over rumors that an Hispanic group in Wisconsin was going to exercise the group’s First Amendment right to free speech in a public place), 13th (Majority Leader Scott Fitzgerald), 23rd (Terry Moulton), and 29th (Jerry Petrowski, currently the only Republican state senator who intends to vote against the wage theft bill), and Compas could not find a single local chamber of commerce in those seven Wisconsin State Senate districts that was publicly willing to support the Wisconsin wage theft bill. Compas’s piece on her findings, which she published to the WBA’s website, is a fine example of investigative journalism. In fact, Compas’s piece has been republished in full by Steve Hanson of the progressive blog Uppity Wisconsin and featured in an online article published by the Milwaukee-area alternative newspaper Shepherd Express.

It’s official: The right-wingers in Wisconsin are now pushing for even more union busting in Wisconsin.

Lorri Pickens, a former political operative for the Koch Brothers front group Americans for Prosperity (AfP), is now leading a front group called Right to Work Wisconsin, whose mission is to convince the Republicans that control the Wisconsin State Legislature to pass a so-called “right-to-work” bill. Other individuals behind this group include Chris Martinson, Kenosha School Board member Bob Nuzzo, and 2014 Wisconsin State Treasurer Republican primary candidate Randy Melchert. This group may have the backing of the Koch Brothers and other big-money Republican/conservative donors.

If enacted in Wisconsin, a “right-to-work” bill would allow public-sector and private-sector workers who are not members of a union to benefit from collective bargaining agreements between management and union workers without joining the union or paying union dues, effectively allowing non-union workers to benefit from the wages, benefits, etc. of union contracts without paying for the benefits. To put that another way, “right-to-work” is actually the moral equivalent of legalizing shoplifting, since allowing non-union workers to not pay for benefits negotiated by unions is just like allowing shoppers at department stores to not pay for clothes, toys, video games, and so on. Additionally, a “right-to-work” bill would drive down wages in Wisconsin, put thousands more Wisconsin families into poverty, decrease the amount of revenue that Wisconsin receives from income taxes, hurt economic growth in Wisconsin, and cost Wisconsin thousands of jobs.

I hope enough Republicans in the Wisconsin State Legislature come to their senses and oppose a “right-to-work” bill, because Scott Walker would sign it into law in a heartbeat if it were to hit his desk and Wisconsin can’t afford it.